Conceptual Academy offers self-study science courses for the homeschool. Each course includes top quality lessons and materials created by experienced instructors who are also the authors of the widely used “conceptual” line of textbooks. Through Conceptual Academy, students develop a deep and durable understanding of science concepts. With this understanding comes a heightened appreciation for the natural world in which we live.

Tools for the Home School

The authors’ textbooks and online video tutorials are widely used among high schools, colleges, and universities. They have also been popular among homeschoolers for many years. In developing Conceptual Academy, the authors wanted to create tools to support this growing community. Toward this they developed a set of self-study science courses. Each of these self-study courses is essentially an entire college curriculum with automated quizzes and grade book included. In place of the college professor, the authors themselves step in to guide the student through the concepts. They do so not only through their textbooks, and video tutorials, but also “virtually” through what are known as the “From Your Instructor” (FYI) pages. It’s through these FYI pages that they offer study advice for each class, worksheets, chapter summaries, ideas for hands-on activities, and even unit exams. The homeschooling teacher serves the role of a coach who is there in person to inspire and to ensure the student remains on task. 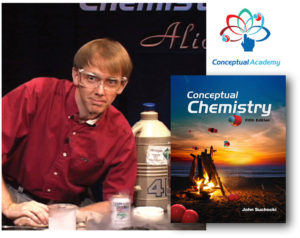 Through a Conceptual Academy self-study course the student has access to an accredited curriculum designed by well-established textbook authors with decades of classroom experience. There are many self-study courses from which to choose, each customized to meet the varied interests of students. For example, we currently offer four “flavors” of chemistry courses including three “customized versions” (life sciences, environmental chemistry, or college-prep chemistry) and the “full version” chemistry course covering the entire textbook. Look to the “Homeschool Courses” menu for complete course descriptions.

It’s not just that our self-study courses are comprehensive, accredited, and affordable. Perhaps most notable is the top quality of the curriculum itself. The authors are as engaging within their textbook narratives as they are within their video presentations. This is why their curriculum is popular world wide having been translated into many languages. They are experts at simplifying otherwise tough concepts and providing insight into how these concepts are connected to each other and to the real world in which we live. Your student will be challenged but these challenges will be well-placed. There will be many joyful “ah ha!” moments of understanding as your student explores the science underlying the physical workings of this amazing and beautiful universe. With this top quality, your student will be in very good hands. This includes students seeking a strong foundation before moving to a science-oriented field as well as those merely seeking to be “turned on” by the joys of learning science.

The History of Conceptual Academy

Everything conceptual about Conceptual Academy began with Paul Hewitt who in the 1970s wrote the landmark college physics textbook Conceptual Physics, now in its 12th edition and still the market leader in its field. Prior to Conceptual Physics, all physics courses at the high school college level were accessible only to those who were adept and interested in numerical problem solving. Paul Hewitt saw physics differently. He saw physics as a study of the rules of nature, which are important to all of us, no mater what your skills in mathematics. Physics is certainly described elegantly by mathematics, but Paul understood that it could also be elegantly described in English when the focus was on the concepts. Thus was born the Conceptual Physics curriculum that has been used by literally millions of students world wide as a relevant and vital approach to learning this most fundamental of sciences. 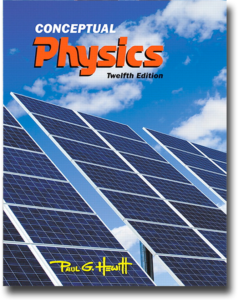 In the early 1990’s Paul recruited his chemist nephew, John Suchocki, and geologist daughter, Leslie Hewitt, for the creation of Conceptual Physical Science, which applies the conceptual approach to physics, chemistry, Earth Science, and astronomy within a single textbook. John then branched out to create his Conceptual Chemistry title first published in the year 2000 and now in its fifth edition. In 2008, the conceptual team was joined by top-notch educators Suzanne Lyons and Jennifer Yeh for the production of their now well-known Conceptual Integrated Science title. In the 2000’s is also when the team first produced their “Explorations” titles for a younger audience, including Conceptual Physical Science Explorations and Conceptual Integrated Science Explorations.

Through his teaching at the University of Hawaii and then at Saint Micheal’s College, John gained a fair amount of experience in developing video lessons for online delivery. In 2011, he and Paul were discussing the possibility of creating a site that the delivered online videos not just for John’s chemistry title, but for all of the conceptual titles. Casually, Paul suggested the name: Conceptual Academy, which thus became the focus of their next major endeavor. Two years later the site was launched not only as a library of their video lessons but as a dedicated “content management system” through which the author’s videos and other learning resources could be collated to the syllabus of each instructor using one of the conceptual titles.

This had and continues to have some major implications. The professor can assign textbook readings. But with Conceptual Academy, the professor can also assign video lessons that complement these very same textbook readings. With Conceptual Academy working in tandem with the textbook, college students can “go home for their lectures” and come to class to study under the expert guidance of the course instructor. This is a long overdue shake up from the traditional model whereby students come to class merely to listen. Instructors using Conceptual Academy are free to spend more time in class interacting with their students, effectively putting the student on center stage. This is not necessarily a more comfortable situation for the student, nor the instructor. But it is arguably a much better model through which learning is not only more meaningful, but durable.

Over the years, the home school community had been using John’s online curriculum and he took notice of 1) the high caliber of the typical home schooled student and 2) the equally high caliber of the typical home schooling parent. In developing Conceptual Academy he insisted that tools also be built to accommodate what is clearly a growing need for home schools: high quality and accessible self study science courses at both the junior and high school levels. Thus was born the Conceptual Academy self-study courses now available to accompany each of our conceptual titles.